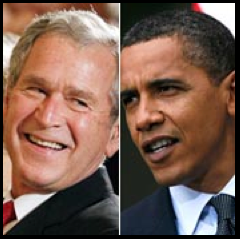 "Until conservatives once again hold Republicans to the same standard they hold Democrats, they will have no credibility and deserve no respect. They can start building some by admitting to themselves that Bush caused many of the problems they are protesting."

More excellent analysis:
"Finally, conservatives have an absurdly unjustified view that Republicans have a better record on federal finances. It is well-known that Clinton left office with a budget surplus and Bush left with the largest deficit in history. Less well-known is Clinton’s cutting of spending on his watch, reducing federal outlays from 22.1 percent of GDP to 18.4 percent of GDP. Bush, by contrast, increased spending to 20.9 percent of GDP. Clinton abolished a federal entitlement program, Welfare, for the first time in American history, while Bush established a new one for prescription drugs."

"According to the CBO, federal taxes will amount to just 15.5 percent of GDP this year. That’s 2.2 percent of GDP less than last year, 3.3 percent less than in 2007, and 1.8 percent less than the lowest percentage recorded during the Reagan years. If conservatives really believe their own rhetoric, they should be congratulating Obama for being one of the greatest tax cutters in history."