Nickel That is Lighter Than a Feather

I wonder how it will hold up in an earthquake!  Here's more from a cool LA Times article:

"Scientists have invented a new material that is so lightweight it can sit atop a fluffy dandelion without crushing the little fuzzy seeds.

It's so lightweight, styrofoam is 100 times heavier.

It is so lightweight, in fact, that the research team consisting of scientists at UC Irvine, HRL Laboratories and Caltech say in the peer-reviewed Nov. 18 issue of Science that it is the lightest material on Earth, and no one has asked them to run a correction yet.

The material has been dubbed "ultralight metallic microlattice," and according a news release sent out by UC Irvine, it consists of 99.99% air thanks to its "microlattice" cellular architecture.

"The trick is to fabricate a lattice of interconnected hollow tubes with a wall thickness 1,000 times thinner than a human hair," lead author Tobias Shandler of HRL said in the release.

To understand the structure of the material, think of the  Eiffel Tower or the Golden Gate Bridge -- which are both light and weight efficient -- but on a nano-scale."
Posted by Wes at 8:16 PM 65 comments:

Lawrence Lessig's NY Times Op-Ed, "More Money Can Beat Big Money", presents a credible alternative to our current state of allowing wealthy donors to control Congress.  Publicly funded elections, at all levels, is incredibly important to achieving democracy in America.  LET'S GET ON BOARD AMERICA!!!

"Despite the founders’ intentions, however, Congress has evolved from a dependency “upon the people,” to an increasing dependency upon the funders. Members spend 30 percent to 70 percent of their time raising money to stay in Congress, or to get their party back in power. Less than 1 percent of Americans give more than $200 in a political campaign. ...

So long as elections cost money, we won’t end Congress’s dependence on its funders. But we can change it. We can make “the funders” “the people.” Following Arizona, Maine and Connecticut, we could adopt a system of small-dollar public funding for Congress."
Posted by Wes at 11:29 PM 12 comments:

Gingrich is such an embarrassment to the USA

"Bloomberg News reported this week that Gingrich made between $1.6 million and $1.8 million for giving additional “advice” to Freddie Mac. ...

This is not just another Gingrich laugher, up there with his revolving Tiffany’s account or his multiple personal hypocrisies. This story encapsulates why Washington is broken and how the powerful protect and enrich themselves, unanchored to basic principles.

At the same time, it’s a case study in the Gingrich method: denounce something as outrageous, while doing that very outrageous thing himself. (Politicians with ties to Freddie Mac came in for scathing Gingrich criticism in 2010.) There is no evidence, as Gingrich claimed last week in a debate, that he offered Freddie Mac a dime’s worth of advice in his capacity as a “historian,” or warned against a surge in subprime lending. To the contrary, former Freddie Mac executives told Bloomberg that Gingrich was brought in to help the agency continue down the very path of its ruination – backing subprime mortgages."  Read more.
Posted by Wes at 11:23 PM 14 comments:

Yet another example of the self-dealing, unethical behavior Congress permits for itself, at the expense of taxpayers.  Insider stock trading is legal for members of Congress.

Why you should take candy with you to the car dealer

"People with the best self-control are the ones who structure their lives so as to conserve willpower. They don’t schedule endless back-to-back meetings. They avoid temptations like all-you-can-eat buffets, and they establish habits that eliminate the mental effort of making choices. Instead of deciding every morning whether or not to force themselves to exercise, they set up regular appointments to work out with a friend. Instead of counting on willpower to remain robust all day, they conserve it so that it’s available for emergencies and important decisions.

“Even the wisest people won’t make good choices when they’re not rested and their glucose is low,” Baumeister points out. That’s why the truly wise don’t restructure the company at 4 p.m. They don’t make major commitments during the cocktail hour. And if a decision must be made late in the day, they know not to do it on an empty stomach. “The best decision makers,” Baumeister says, “are the ones who know when not to trust themselves.”
Posted by Wes at 7:50 PM 27 comments:

"The legitimate object of government, is to do for a community of people, whatever they need to have done, but can not do, at all, or can not, so well do, for themselves—in their separate, and individual capacities."
- Abraham Lincoln
Posted by Wes at 2:58 PM 15 comments: 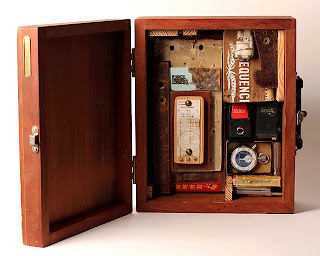 The construction inside this wooden suitcase is what the interior of the dumpster will look like. I made this so I could take it with me to meetings and show people what I am going to do. Eventually, in one of these meetings, there will be someone who says:
"I like it; here's a dumpster."

I love this website.  Mac is cataloging his keepsakes before artfully arranging them in a dumpster.
Posted by Wes at 11:28 AM 12 comments:

In his New York Times Op-Ed, "The Prosecution Rests, but I can't," John Thompson makes a very strong case for creating a law that penalizes prosecutors who knowingly disregard the law and withhold evidence.  And these prosecutors can still practice law?  They should at the very least lose their license. Where is the Louisiana Bar Association and the ABA?  But taking eighteen years of an innocent man's life.  Come on?  These prosecutors should be thrown in jail.  No doubt it's a tough job, but right now, it's all upside for prosecutors, with little or no risk if they break the law in pursuit of conviction.

Plastics: Too Good to Throw Away

A great article by Susan Freinkel in The New York Times presents a more balanced view of plastics.

"Originally, plastic was hailed for its potential to reduce humankind’s heavy environmental footprint. The earliest plastics were invented as substitutes for dwindling supplies of natural materials like ivory or tortoiseshell...."
Posted by Wes at 1:06 PM 14 comments: