"One of the largest sources of campaign contributions to Senate Democrats during this year’s health care debate is a physician-owned hospital in one of the country’s poorest regions that has sought to soften measures that could choke its rapid growth." - NY Times. full article

And which doctor-owned hospital?? Doctors Hospital at Renaissance in McAllen, TX, which Atul Gawande exposed quite convincingly in his June 1 New Yorker article, "The Cost Connundrum."
Posted by Wes at 12:58 PM 12 comments:

"If you wish to gaze upon the depth and breadth of America’s racial divide–particularly the canyon-like gulf between white folks and black folks–you need look no further than the recent incident involving Harvard Professor Henry Louis Gates Jr., Cambridge police officer James Crowley, and now, President Obama who weighed in on the matter a few nights ago, when asked for his reaction to Gates’s arrest on charges (since dismissed) of disorderly conduct. In this case, as with so many other news stories that have touched on race–the O.J. Simpson trial and the aftermath of Hurricane Katrina as just two of the more obvious examples–whites and blacks, generally speaking, and with obvious exceptions on both sides, see the story and the racial component of the story in fundamentally different (often diametrically opposed) ways.

To hear most white folks tell it, Gates was to blame. ..." 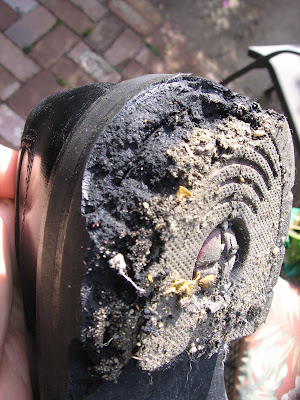 My Ecco Shoes just fell apart, with very little wear and great maintenance - they always had shoe trees and were polished regularly. Unbelievable! The soles just crumbled all over my car mat, staining the carpet with sticky tar. Don't buy Ecco! As you can see from the photos below, the leather part of the shoes is still in great shape, but the soles are now a gooey tar. Ecco needs to replace these and change their materials.

I just set up a Facebook Group (Ecco Shoes Suck!) to increase awareness and inform fellow shoppers not to buy Ecco. Please share your photos and experience there.


Ecco Shoes may feel comfortable, but their special rubber soles fall apart and are not worth the money. Ecco needs to change their shoe materials to something more reliable and environmentally safe, and to reimburse us for the cost of our expensive shoes.
Posted by Wes at 2:00 PM 59 comments:

Companies are so behind the times. I ordered online from REI and Brookstone. Two weeks later, I get paper catalogs via snail mail from REI, Brookstone, and Crate and Barrel. What a waste! I didn't ask for these catalogs. Companies should set an opt-in policy for paper catalogs rather than opt-out. Most of the industrial world is online. We don't need mail-order catalogs. Why are they cutting down trees for something I prefer to see online? Companies may think I will buy more with a mail order catalog in my home. In fact, I'll buy less because I don't want to support companies with such poor environmental practices.

Now you can easily remove yourself from mailing lists. It's Free. Go to:

Finally some straight talk about health care and rationing.

"On a blog on Fox News earlier this year, the conservative writer John Lott wrote, “Americans should ask Canadians and Brits — people who have long suffered from rationing — how happy they are with central government decisions on eliminating ‘unnecessary’ health care.” There is no particular reason that the United States should copy the British or Canadian forms of universal coverage, rather than one of the different arrangements that have developed in other industrialized nations, some of which may be better. But as it happens, last year the Gallup organization did ask Canadians and Brits, and people in many different countries, if they have confidence in “health care or medical systems” in their country. In Canada, 73 percent answered this question affirmatively. Coincidentally, an identical percentage of Britons gave the same answer. In the United States, despite spending much more, per person, on health care, the figure was only 56 percent." - Peter Singer, New York Times Magazine

If you haven't lived in a country with a national health care system, like England, Canada, Australia, etc - your views bear little weight because you've never experienced it. I have, and I found my experience with England's health care system, far superior (in terms of care received, costs, efficiency, same day appointments with all doctors, etc) to the US Health Care System.
Posted by Wes at 11:42 AM 15 comments: