No eyebrows = you're less recognizable 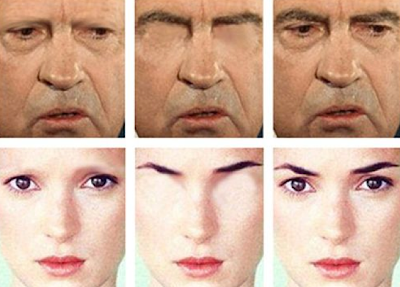 Volunteers in a study by Javid Sadr and his colleagues at MIT were asked to identify fifty famous faces, including that of former U.S. president Richard Nixon and actor Winona Ryder. The photos were digitally altered and shown either without eyebrows or without eyes. When celebrities lacked eyes, subjects could recognize them nearly 60 percent of the time. However, when celebrities lacked eyebrows, subjects recognized them only 46 percent of time. The lesson: eyebrows are crucial to your identity — they’re at least as important as your eyes, if not more so.
Posted by Wes at 5:04 PM